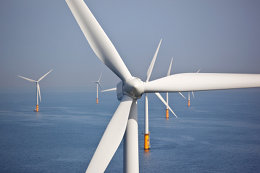 This page looks at some of today's top wind energy companies and their recent projects.

The world's largest offshore wind farm was recently completed off the coast of Cumbria.

The Walney wind farm project was completed in two phases, at a cost of £1.2 billion.

The wind farm, which consists of 102 wind turbines, is expected to generate enough power to provide electricity to 320,000 homes.

It has a total installed capacity of 367 megawatts.

The project set a precedent as it is the first renewable energy project to be funded entirely by foreign pension funds [2].

Working closely with researchers from the University of Calgary, TransAlta representatives have been trying their best to get to the bottom of what causes bat mortality around wind turbines, and how it can be reduced or prevented.

Research conducted in the Pincher Creek area shows that a sudden drop in air pressure around the blades is the reason for the high rate of bat deaths.

The drop in pressure causes barotrauma – fatal injury to the lungs – in bats, who are not physiologically equipped to cope with the sudden drop in air pressure.

The research looked at ways to reduce bat mortalities, and deduced that bat activity is highest in low-wind conditions.

By slowing turbines down to virtually motionless during periods of low wind speeds, bat mortalities can be substantially reduced, without significantly affecting the amount of energy generated by the wind farm.

TransAlta has implemented these measures in wind farms, reducing bat mortality by up to 60% [1].

A team of researchers from the Kyushu University's Research Institute for Applied Mechanics (RIAM) have designed a super efficient wind turbine, called a 'wind lens' that is nearly three times more efficient than regular wind turbines.

By incorporating a diffuser shroud that encircles the outer circumference of the rotor blades, and an outer brim, strong vortices are created, which lowers the pressure behind the turbine, creating a wind suction effect that draws more air through the turbine.

The result is that wind power is magnified, significantly enhancing energy production [7].

Web hosting company, HostGator, has taken the initiative to power its servers with green wind energy.

As hosts to over 4 million websites, HostGator's servers require a lot of power to keep them running, and to keep them cool.

After switching to energy efficient servers, they took a further step to reduce their carbon footprint by purchasing renewable energy certificates equivalent to 130% of their energy consumption.

This equates to enough energy to power 321 homes with green energy for a year.

Bringing Wind Energy to the Masses with Small Wind Turbines

Urban Green Energy has a major point of difference to other wind energy companies – their products take advantage of the energy generated by low wind speeds.

They believe that by providing an opportunity for more people to tap directly into wind power by distributing small scale wind turbines to the masses, they can contribute enormously to the clean energy revolution.

To this end they have designed a number of products that take advantage of low speed winds, to deliver wind power to homes and small businesses [5].

The units consist of an asymmetrical vertical turbine that can capture wind coming from all directions.

This allows the turbine to operate at much lower speeds than conventional fan-type wind turbines, reducing noise, and hazards to birds as a result of collisions.

The company produces a 600 watt, 1 kilowatt, and 4 kilowatt models, ranging in price from $4000 to $19,000 for the turbine [6]; they also provide additional products and services, such as installation, batteries, and monitoring tools that let you monitor both energy generated, and your energy consumption, remotely from anywhere in the world – how cool is that?