Parts of a Wind Turbine 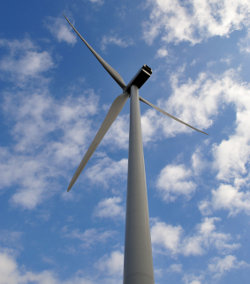 Wind power is the fastest advancing source of clean energy today. Want to understand the different parts of a wind turbine? LET'S EXPLORE ...

The main equipment needed to harness wind energy is a wind turbine – consisting of a tower, frame, turbine blades, and generator.

Other parts are required to deliver useable electricity, such as inverters, cabling, batteries, charge-controllers, and an electricity meter if you want to sell electricity back to the grid.

This article details the different parts of a wind turbine and how they work.

The fastest and most consistent winds are high above ground level, so turbines are raised on a tower in order to generate more electricity.

The main reason for this is that wind speeds are naturally faster and more consistent above ground level. Ground level winds also tend to be more turbulent.

Beyond naturally occurring physics, ground level wind speeds are interrupted and slowed by things like trees and buildings.

Turbines are designed with specific wind speed ranges in mind. These vary depending on the size and location of the turbine.

Speed controllers and cut-off switches are used to prevent damage in high winds.

The turbine itself consists of blades, frame, shaft, generator, and tail.

The frame holds the pieces together and strengthens the system. The wind turbine blades (normally two or three blades) are aerodynamically shaped to catch the wind, turning a shaft which is connected to a generator.

The generator transforms the mechanical energy into electricity through a process called electromagnetic induction.

A tail is used to keep the first-contact parts of a wind turbine, such as the turbine blades, at the optimal angle to the wind.

Because the electricity produced by a wind turbine (DC) is different to that used by household appliances and fittings (AC), a small inverter is used to convert the wind turbine's DC electricity into useable AC electricity.

The wind turbine inverter converts the DC electricity to AC.

Some small-scale wind energy users don’t use inverters – instead using the wind-electricity to charge batteries then run appliances off the batteries.

Cabling is a significant cost when installing wind turbines. Most people position turbines a long distance from buildings in order to reduce noise and aesthetic interruption, as well as getting the optimal wind position. Larger distances mean more wind turbine cabling and larger costs.

For this reason most wind turbine installations use batteries to store excess electricity.

These deep cycle batteries are different than normal batteries in that they are suited to trickle charging, can often retain enough power to last for days, and can be recharged many times.

Using batteries is particularly useful for people in isolated rural areas where grid power is inaccessible or expensive.

Battery charge controllers ensure that the batteries don’t over charge. They act as a cut-off switch, or may be automated to cease charging the full battery and start charging another battery.

This prevents degradation of batteries and potential problems such as overheating or exploding batteries.

Instead of using batteries, many wind energy producers opt to stay connected to the grid.

Excess wind-generated electricity can also be sold back to the electricity companies through the grid in many places.

Meters are one of the electrical parts of a wind turbine that really make wind energy economically viable. Expensive capital costs can be mitigated by income from wind-generated electricity.

As well as the advantage of not being totally dependent on the winds, staying grid connected means battery costs can be avoided.

7 comments on “Parts of a Wind Turbine”