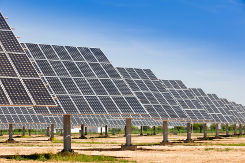 The energy game has changed. And this change has given birth to a number of major, fast growing, and innovative solar energy companies.

These companies will play a big role in bringing clean power, improving access for developing nations, and driving the energy future.

Below we look at some of the top solar energy companies today.

Suntech was one of China’s first solar energy companies and is now the world’s largest silicon solar panel producer.

The company has grown quickly since its establishment in September 2001 and now has a presence in 80 countries worldwide and a dynamic research and development team spread across five countries.

One of the company’s key milestones was winning a contract to supply the solar panels for the revolutionary Bird’s Nest 2008 Olympics Arena in Beijing - a 130 kW solar installation.

The business has also successfully penetrated the western market by establishing its first U.S. factory in Arizona on January 2010.

Suntech’s technology now ranks among the best in the world after attaining a photovoltaic conversion efficiency of 19% for mono crystalline solar cells and 17% for polycrystalline photovoltaic cells in 2009 and attained the 2 GW (gigawatt) mark in 2011.

Through continuous research and development, the company has won several awards for ground breaking work in the solar energy industry.

They’ve balanced efficiency and cost to develop the lowest cost solar panels per watt - with the price of less than 1$/watt.

Although First Solar uses cadmium tellurium (Cd-Te) panels, which are less efficient than the crystalline panels, they have been able to consistently set world records for efficiency of the Cd-Te panels, first at 13.4% and now at 14.4% [2].

The First Solar power systems are particularly attractive because they have the fastest energy payback time when compared to all other photovoltaic PV systems in the market.

Sharp Solar is a subsidiary business of the Japanese electronics giant, Sharp.

The company has been developing solar power solutions for more than 50 years and has secured a large consumer base and is well trusted in the industry.

Sharp Solar was the first of all solar energy companies to achieve 2 GW of solar cells.

The company’s development has been greatly supported by the fast growth of the local Japanese solar market.

Cheap production costs are a common characteristic of most Chinese manufacturing companies.

Yingli Green Energy Company has taken advantage of these cheaper labor and material costs to focus on innovation in order to maintain a competitive edge.

The company develops products across the entire photovoltaic value chain.

These products include poly silicon material, ingots, wafers, solar cells and photovoltaic modules. In this way, the company has been able to serve a wide range of clients and offer a variety of solutions to each.

Significant growth in the Chinese solar energy Industry has caused the prices of solar panels to drop worldwide and the latest reviews have it that seven out of the ten top solar energy companies in the world are Chinese [6].

Recent trends show that whereas Chinese solar companies are growing exponentially, some major American companies have exhibited the opposite result.

In the USA, two major solar companies which in 2009 had been among the top in the world, Solyndra in California and Evergreen Solar in Massachusetts [7] [9], filed for bankruptcy in 2011 [8].

Solyndra was a champion of the innovative Copper Indium Gallium Selenium (CIGS) solar panels, with a focus on rooftop modules. Solyndra was able to attract investors and governmental support, with sales contracts reportedly worth over $1 billion [7].

With the drastic drop in costs of solar panels over the last 3 years, Solyndra's business model became unfeasible and the company could no longer compete, despite further government support through the US Energy Department's loan guarantee program [9].

[5] Yingli Solar – About Us: http://www.yinglisolar.com/us/about-us/