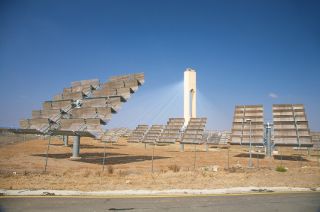 As the name suggests, concentrated solar power uses mirrors to concentrate the sun's energy onto one point. Let's explore more...

Concentrated solar is fundamentally different from the solar photovoltaic (PV) power in that it uses the sun’s heat to generate electricity whereas concentrated solar often uses a solar-thermal method.

Solar PV cells rely on the sunlight being converted directly to electricity while CSP focus the sunlight using reflectors to generate heat that is used to run a steam engine and drive an electric generator [3].

This is the same way power is generated in a fossil fuel thermal plant – using the sun’s heat instead of heat from burning fossil fuels.

What Are The Different Types of Concentrating Solar Power Systems

Parabolic troughs use reflective material to focus sunlight onto a focal point – a receiver pipe [5].

The receiver pipe contains fluid which transfers the heat to boil water and turn generator turbines.

The parabolic trough design allows the sun’s heat to be focused to between 30 and 100 times its normal intensity [6].

A collector field is made up of an array of multiple parabolic troughs arranged in parallel along a north-south axis [4].

In order to maximize output, the troughs are setup with sun trackers to move about a north-south axis as the sun spans the sky from east to west [4].

This is necessary because the trough has been designed to direct all the sunlight onto the receiver pipe - therefore the angles at which the sunlight hits the trough need to be the same throughout the day.

A heat transfer fluid (HTF) runs through the receiver pipe. Oil is commonly used at the HTF but molten salt is also used frequently [2].

The main characteristics of these fluids are that they can retain high temperatures without turning into gas.

This hot fluid is channeled through a system of pipes where it heats water and generates steam, which is routed to run a steam powered turbine that drives an electric generator [5].

Some advanced systems have energy storage systems that allow the storage of hot fluid for use after the sun sets while other systems have fossil fuel or natural gas powered backup systems [4].

Parabolic trough systems are the oldest and thus most common CSP systems in use today with early developments of about 354 MW which were installed between 1984 and 1991 in the Mojave Desert in California [5].

Concentrated solar towers work on the same principle as the parabolic trough system:

The difference between solar towers and parabolic trough systems

The main difference between the tower and parabolic trough systems is the way the sun is reflected.

Solar tower systems use an array of mirrors, known as heliostats, which have been programmed to track the sun’s motion [4].

These heliostats focus and concentrate the sunlight on a central tower mounted receiver. Unlike the Parabolic trough which increases the sun’s intensity about 100 times, the tower system causes the sunlight to hit the receiver at about 1,500 times the normal intensity of the sun [6].

In 2009, a 20MW solar tower plant went online in Seville, Spain [7]. According to reports the tower systems will be developed to generate between 50MW and 200MW each in the near future [4].

The parabolic or solar dish systems focus and concentrate the sun’s intensity in a manner amplifies it up to 2000 times [6].

This high intensity makes it the most efficient system attaining a sun-to-grid conversion rate of 31.5% [7].

The parabolic dish system is made up of a solar concentrator, which is a dish, and a power conversion unit.

The power conversion unit is made up of a heat engine mounted on a receiver [4].

The Dish is mounted on a two-axis system that is programmed to follow the sun throughout the day because the concentrator has to get the most out of the sun in order to maximize the heat delivered at its focal point where the power conversion unit is located [4].

The receiver, which is part of the power conversion unit and lies between the engine and the dish, is made up of a series of tubes that carry a cooling fluid.

This system is conventionally smaller than the solar tower and parabolic trough systems. Nevertheless, what it lacks in size, it makes up for in power generation.

Most systems use either helium or hydrogen as the heat transfer fluid. The fluid absorbs the heat directed at the power conversion unit by the dish and transfers it in controlled amounts to the heat engine where it is converted to electricity [6].

Stirling or Brayson Cycle engines are the preferred choice of power conversion engines used in these systems [4].

The Future of CSP

It is natural that CSP would be compared to solar PV when assessing the future of the technology because they are both solar powered systems. There are three main factors considered when power utilities are debating on which renewable energy technology to generate electricity from. They are [8]

Leading researchers argue that CSP is in a position to perform better than solar PV in all the three categories [9] especially since the inexpensive thermal storage offered by CSP systems allow for better delivery of energy upon demand [9].

Nevertheless, the recent drops in PV prices of between 30% and 40% have rocked the boat enough for investors to trust more in PV technology [11].

The bottom line is that the CSP technology still lags far behind PV as far as market penetration is concerned.

As a result, market growth surveys and projections continue to indicate that the technology will take a long time to catch up with solar PV.

This shows that the market growth prospects of CSP systems are much faster than PV since CSP systems are expected to increase 37 times while PV will increase about 6.5 times. Other factors such as availability of land for CSP systems may limit the developments, but only time can tell.

[10]. Examiner – Market Growth for PV Solar vs. CSP: Which is Fastest: http://www.examiner.com/article/market-growth-for-pv-solar-vs-csp-which-is-fastest