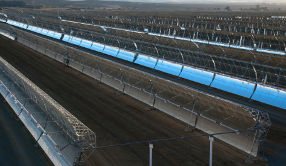 So, photovoltaic efficiency refers to how efficiently a solar cell or solar module produces electricity.

Photovoltaic efficiency describes the efficiency or conductivity of solar panels - the percentage of radiation (sun) energy that can be converted into electrical energy.

Currently, photovoltaic efficiency of silicon crystalline solar panel modules is up to 22% [1] - meaning those systems convert up to 22% of the sun's energy they're exposed to into useable electricity. Crystalline silicon was the first mainstream solar technology, and continues to be the most commonly used.

New technology silicon thin-film photovoltaic module efficiency is up to 8% [1]. Although thin-film is less efficient, its advantages are that it's less bulky, has more applications, and is easier and cheaper to produce and install.

Thin film solar panels are expected to become vastly more efficient as the solar and alternative energy race heats up.  Alta Devices Inc have developed a thin-film solar cell that’s achieved 28.4% efficiency. It uses gallium arsenide (GaAs) as a conductor, rather than the traditional silicon based conductors. [2]

Photovoltaic efficiency not the only factor

Angle and location also weigh in on the efficiency of solar panels. You'll need to figure out the optimal placement for your location to get maximum sun exposure hours.

In New Zealand, the north facing side of the house gets most sun exposure so New Zealanders install solar panels to face north, whereas solar panels in the United States generally face south.

As the sun moves, the panels change angle... boosting efficiency throughout the day.

Commercial solar farms like the Montalto di Castro solar park in Italy use sun tracking systems to maximize the amount of time that solar panels are exposed to the sun's radiation [3].

Similar systems are available for smaller scale private solar panels, however are less popular than static due to increased setup costs and maintenance.

Multijunction solar cells are another exciting new solar innovation. Individual solar cells (normally silicon) only react to a certain range of light depending on their molecular makeup - some silicon conducts and reacts to ultra-violet light, while other silicon reacts to infra-red light.

Measures Beyond Efficiency of Solar Panels

Other measurements to be aware of when researching solar power are photovoltaic capacity and watt hours.

Photovoltaic capacity refers to the maximum power output a solar panel module is designed to produce – if the solar module were exposed to constant and direct radiation.

Photovoltaic power capacity ranges from large solar farm installations, such as Montalto di Castro with a peak capacity of 24 mega watts [3], to small residential solar modules with a capacity of 180 watts.

It’s important to note that photovoltaic efficiency and capacity of solar panels are useful as indications only – they’re not measures of actual production.

Time of day, amount of sunshine or cloud, location, and numerous other factors will influence actual solar power production levels.

For these reasons, worldwide solar production is estimated to be around 25% of peak capacity levels.

Watt hours is arguably the most useful indication of a solar installation’s value as it can be directly compared to watt hours of electricity produced by traditional fossil fuel energy production or to how many watt hours a town or individual family uses.

Furthermore, by looking at expected watt hour generation, a cost per kWh figure can be calculated and compared.