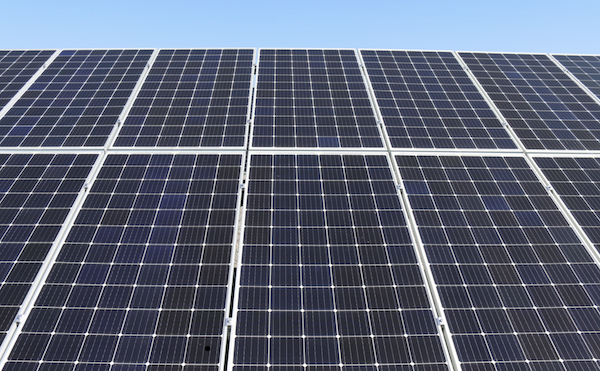 Solar panels work through the "Photo-voltaic Process" - where radiation energy (photo) is absorbed and generates electricity (voltaic). Let's explore it below.

When the sun's radiation hits a silicon atom, a photon of light energy is absorbed, 'knocking off' an electron.

The electric current then goes to an inverter, which converts the current from DC (direct current) to AC (alternating current).

The system is then connected to the mains power or electricity grid.

These are by far the most common solar panels. If you've come across a solar panel installation, chances are it uses crystalline silicon technology.

Crystalline silicon technology has been used for around 50 years, and was first developed for powering satellites in space.

Current off the shelf crystalline silicon systems are generally capable of converting up to about 18 % of solar radiation exposure into useable electricity. This is termed as a photovoltaic efficiency of 18%.

The main complaint of crystalline silicon is that the systems are expensive and bulky, installation requires a lot of wiring and labour, and that glass can be prone to damage.

The new breed of solar technology is thin-film solar panels. Thin film is less bulky than crystalline silicon, and increasingly cheaper to produce.

Thin-film solar energy systems currently have a lower photovoltaic efficiency than crystalline silicon – converting around 8% of radiation exposure – however the conductibility is expected to sharply rise as current research improves the method.

Thin-film solar panels work in the same photovoltaic manner as crystalline silicon modules, without the bulky wafers and glass panelling.

Amorphous silicon is a material used in some thin-film flexible solar panels, which can be moulded to essentially any surface such as roofs or walls.

Solar research and development has boomed around the world over the last few years. These include new photovoltaic conversion methods and application technology, large scale solar farms, and increasingly efficient technology.

Below are a few of these developments.

They use the sun's radiation to heat hydrogen gas, which spins a generator, producing electricity. This method has a reported expected efficiency of 30%.

Another development is the number of large scale solar farms, which has recently spiked.

There are now 56 large scale (20 megawatt or more capacity) solar farms, with at least 27 more in the planning or development stages.

One of the largest, the Montalto di Castro Solar Park in Italy, produces 40,000 megawatt hours per year, enough electricity to power around 13,000 Italian households.

American company Solar Roadways has recently been awarded a grant by the US Federal Highway Administration to develop a solar car park.

The idea is to cover the car park’s surface in solar panels, creating a vast surface area for clean electricity production.

Solar Roadways co-founder Scott Brusaw envisages the project spreading to roads once the technology and methodology has been developed with the carpark project.

Beyond the possibility of turning whole roads into electric grids, other features in the pipeline include built in de-icing mechanisms and LED lighting for driver visibility, as well as recharging stations for electric cars - all using free solar energy.

The solar roof tiles are physically like any other roof tile, and are nailed to the roof just like traditional tiles.

How the tile solar panels work is along the same concept as conventional solar - the tiles plug into each other to create an array, then an electrician connects the panels to an inverter, and into the mains power of the building.

48 comments on “How Solar Panels Work”