Hydroelectric Energy - how it works, stats, history, advantages and disadvantages. 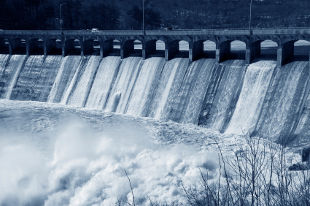 This article looks at how it works, some of the advantages of hydroelectric energy, and what history has told us about some of the disadvantages.

About 20% of the world’s electricity is currently generated from hydropower with China, Canada and Brazil leading in installed capacity respectively [1].

Some countries, like Paraguay, Zambia and Norway, generate between 98 –100% of their electricity from hydroelectric power [6].

How Does Hydroelectric Energy Work

The Main Parts of a Hydro-Electric Power Plant

Basically, water under pressure is directed to turn a turbine which drives a generator to produce electricity.

The amount of water flowing through the system as well as how far the water drops determines the amount of electricity produced [1].

The main forces involved are gravity and air pressure; the effects of seasons on weather patterns also influences hydropower generation e.g. the freezing and thawing of ice due to winter.

The capacity and styel of dams and water-channels determine the amount of power that can be generated from a hydroelectric power system.

Ancient societies used the running force of a river to turn water wheels that turned grain grinders and pumped water.

In this way, the first hydroelectric plant was set up and powered by the Niagara Falls in 1879.

Later, in 1882, power operators set a plant on the Fox River in U.S.A to power two paper mills and a house.

Technological advances and increase in electricity demand sparked the construction of man-made waterfalls and dams throughout the 1900’s but the use of hydroelectric power quickly took a back seat to fossil fuels in the 1940’s.

Nevertheless, the extreme dominance of fossil fuels was short lived because interest in electricity generation from hydropower was revived in the 1970’s when fossil fuel prices skyrocketed.

Advantages and Disadvantages of Hydropower

Hydroelectric power is very popular for a number of various reasons.

Hydropower’s lifespan is one major advantage as electricity can be generated consistently for decades without using up any raw materials.

Hydropower’s load factor of between 40 – 60% is very attractive for electricity generation especially when compared to the 15 – 40% obtained from Wind and Solar Energy.

Often, lakes form behind the dam which can also be used for irrigation, leisure, tourism, water sports.

Storing water behind dams has a unique advantage of positioning hydropower as support of Solar and Wind Energy systems which are naturally intermittent. Hydropower doesn’t need to be used at full capacity all the time, but can be ramped up at times when other methods aren’t working or when demand is high.

One of the most relevant characteristics of hydroelectric power today is that there are no carbon emissions when the systems are run to generate electricity. Hydroelectric systems do have “embodied energy” consumption, in terms of the energy-use and emissions that come during construction, but they don’t produce a quantity of toxic by-product for every hour of power produced.

There are however, certain serious disadvantages that have limited the full exploitation of the world’s hydropower potential.

The main disadvantages of hydroelectric energy is that they have a big impact on the local environment and eco systems. Furthermore, some dams have experienced major, fatal, disasters.

The dams create large reservoirs or lakes in areas where they would not otherwise occur. This causes destruction of the natural environment and endangerment of resident species often families and whole communities are forced to relocate permanently.

The change in river flow can cause destructive flooding and effects fish and other marine life behaviour.

There have also been cases where dams have collapsed under the weight of the water and lives lost in the ensuing floods, such as the Situ Gintung dam in Indonesia and Shakidor dam in Pakistan [8][9][10].

Mainly for scale and cost reasons, hydroelectric projects are generally only undertaken by governments or large power companies – rather than private parties.

For a more indepth discussion, visit our article on the advantages and disadvantages of hydroelectric power.

However, the Itaipu Dam on the border between Brazil and Paraguay is known to be the largest dam in the world in terms of annual electricity generating capacity [12].

2 comments on “Hydroelectric Energy - how it works, stats, history, advantages and disadvantages.”